Nobody Tells a Volunteer What To Do: Town Meetings and Open Source 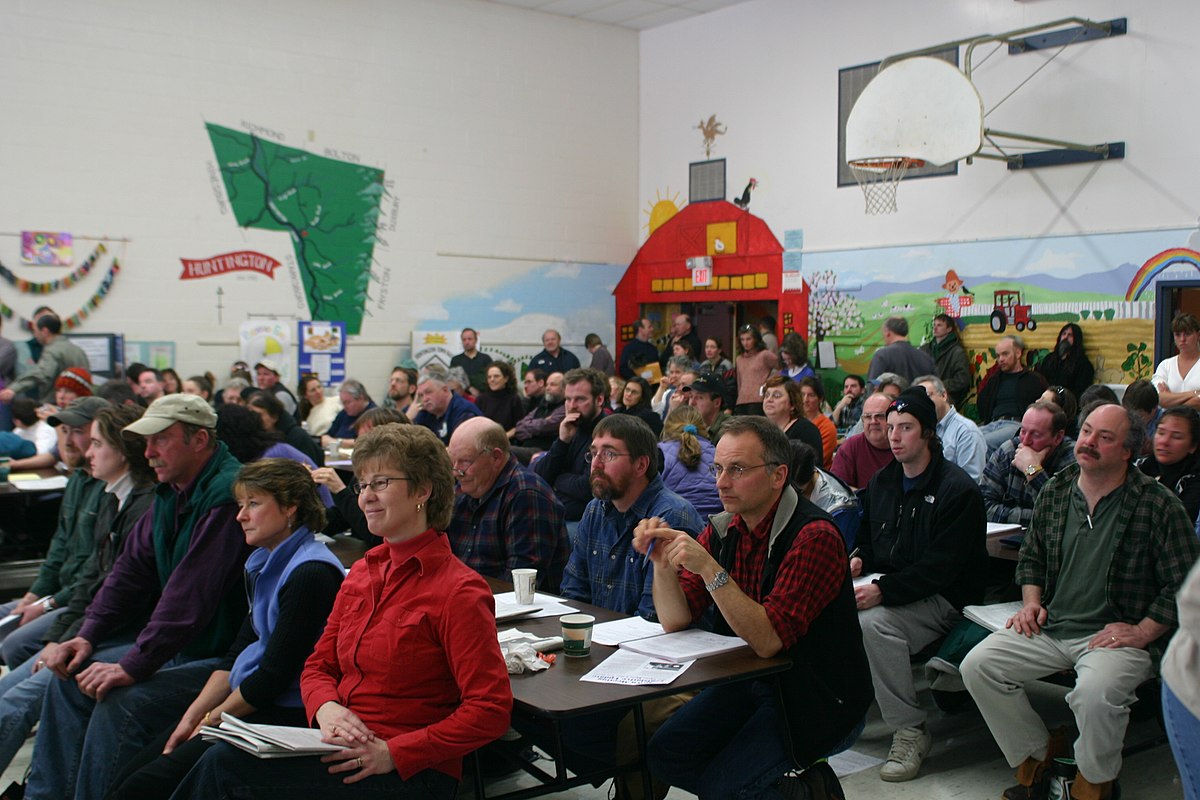 A town meeting is a form of direct democracy in which most or all of the members of a community come together to legislate policy and budgets for local government. It is a town- or city-level meeting in which decisions are made, in contrast with town hall meetings held by state and national politicians to answer questions from their constituents, which have no decision-making power.

Town meetings have been used in portions of the United States, principally in New England, since the 17th century.

It's because open-source contributors are free in a way that employees aren't. They determine whether, when, and how to gift their time. If the project wants them - which is not always true - their voice will be valued from early on.

"Nobody puts baby in a corner":

No one with talent should be stopped from expressing it or showing it off. It’s about self-expression – about enabling anyone to be their best self, and a striking call against anyone who strives to keep people’s potential at bay.

The indigenous original-American critique of Europeans, per Graeber/Wengrow "Dawn of Everything", fits beautifully:

A “chief” had to persuade other members of the tribal council to get agreement on an action he thought was needed. He had to convince his fellows; he could not order them to obey. If he tried, tribal members were free to disobey.

Volunteer developers are free to disobey. Leaders must persuade rather than order.

At the same time, there are definite authorities, always.

Most importantly, somebody does a large enough proportion of work to dominate the shape of the project. And that goes to the most important force in open-source governance: the tyranny of volunteerism.

Robert's Rules of Order are often used to structure meetings:

Robert's Rules is the most widely used manual of parliamentary procedure in the United States. It governs the meetings of a diverse range of organizations—including church groups, county commissions, homeowners associations, nonprofit associations, professional societies, school boards, and trade unions—that have adopted it as their parliamentary authority.

They're valuable because they enable structure while accommodating widely varying social backgrounds:

A U.S. Army officer, Henry Martyn Robert (1837–1923) ... found San Francisco in the mid-to-late 19th century to be a chaotic place where meetings of any kind tended to be tumultuous, with little consistency of procedure and with people of many nationalities and traditions thrown together.

That "people of many nationalities and traditions thrown together" bit is the key. It fits open source perfectly.

People new to open source often find the pace of meetings maddening. It can be hard to know who, if anyone, is running them. Unlike a corporate environment, there are long pauses and uncomfortable silences. But if you are comfortable with silence, the gaps in such meetings can be very hard working.

Silence serves to draw in contributors. Whereas in a corporate meeting the highest-paid person does most of the talking, in an open-source meeting the leaders are those giving away the most labor. Knowledge and engagement are the coin. Silence serves to draw in comments from those who usually engage less. It sells them on contributing more. By voicing opinions they offer labor.

Silence also disrupts formal hierarchy. In a corporate meeting, the amount of talking each person gets to do corresponds with their salary.

Silence discourages overtalkers. It encourages listening. It makes time to contemplate what has already been said.

Quakerism - another historical Americanism - is relevant.

Quaker weddings are conducted similarly to regular Quaker meetings for worship, primarily in silence and without an officiant or a rigid program of events, and therefore differ greatly from traditional Western weddings.

The attendees gather for silent worship, often with the couple sitting in front of the meeting (this may depend on the layout of the particular Friends meeting house). Out of the silence, the couple will exchange what the Philadelphia Yearly Meeting describes as "promises",[3] and Britain Yearly Meeting describes as "declarations" with each other. The promises are short, simple, and egalitarian, and can vary between different regions and meetings.

Maybe commercial open source can thrive without open government. Maybe not. The person who pays the bills will have an outsize influence that can destroy the group's output. For a business to truly benefit from open sourcing, it must create social dynamics like a town meeting.

In the spirit of del.icio.us, here are some links I wanted to save without taking action and that might be useful to you as well as me. https://woob.tech/: Web Outside of Browsers a collection of applications able to interact with websites, without requiring the user to open them in a browser. It also provides well-defined APIs to talk to websites lacking one. https://clearlydefined.io/: Helping FOSS projects be more successful through clearly defined project data. ClearlyDefined and our ...
Read post

Introduction This document is intended as a jumping-off point for people who need specifics about privacy regulations that affect open source development, whether in law or contracts. I can’t and shouldn’t offer legal advice. However, developers need to be able to educate themselves. This is a directory of resources. This document is intended to evolve and grow. I invite you to contribute information on any jurisdictions you are familiar with. Government UN Article 17 of International Coven...
Read post